Do You Know Your CAC Score?

Who’s that you may ask?

You might not know him by name but you’d recognise the colour of his t-shirt.

After performing a bush fire benefit concert in Sydney Greg went into cardiac arrest as he left the stage.

That day, at the ripe ol’ age of 47 he was about to make the unceremonious list of 52 Australians to die from heart disease (19,100 die annually).

Thankfully a nurse attending the concert used a defibrillator to shock his heart back into proper life-giving rhythm.

Once in hospital an ECG revealed a blockage in one of his primary vessels feeding the heart with oxygen-giving blood.

The blockage was treated with a stent and Greg has made a full recovery – but it was touch and go.

I asked Greg whether he had a history of heart disease in the family or if he had any issues leading up to the attack.

“No David, I didn’t but from previous tests my cholesterol was a little high”.

“What do you think was the cause of your high cholesterol”, I asked.

“My diet wasn’t great.  It’s hard to eat well when you’re on the road a lot”, he replied.

Greg’s story is no stranger to any cardiologist.

Heart attacks account for 40% of all cardiovascular deaths with coronary heart disease being the leading single cause of disease burden and death in Australia.

For Greg the cause of his attack was a build up of plaque (a process called atherosclerosis) blocking vital blood vessels feeding his heart.

It’s a gradual process starting in our early 20’s – unfelt and undetected. 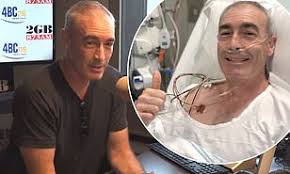 A Coronary Artery Calcium test is like a mammogram for the heart.

It’s a CT scan which measures the amount of calcified plaque in your arteries signaling the start of the deadly atherosclerosis process.

The presence of plaque simply means that a coronary artery has experienced some type of damage – the plaque is like a band aide protecting the lesion.

If you see something really, really white on the x-ray film – that’s calcium.

The resultant CAC score is used to categorize patients into groups based on their risk of a heart attack in the subsequent 10 years.

The more calcium and thickening on the inside lining of the arteries, the higher the score.

The higher your CAC score, the more likely you are to develop heart disease or have an event such as a heart attack or stroke.

The upside of the test is that you can see which coronary arteries are affected i.e. the left main artery or the posterior descending artery etc.

The downside is that it’s difficult to assess the degree of narrowing which has occurred in the arteries.

Keep in mind, though, this score tells us about the chance of developing disease but it’s not a guarantee.

So, people with a 0 score could still have a heart attack, but the risk is very low.

Similarly, people with a high CAC score aren’t certain to have a heart attack.

This is why CAC scoring should be used together with other methods for estimating heart disease such as blood pressure, obesity or a high amount of triglycerides (fat) in the blood.

So If you’re in middle age, like me, book a test today.

I did my test last year at the St Andrews Specialist Centre, Brisbane for under $200.

And I’m happy to say for the first time in my life after taking any test – I’m glad I got a score of zero.

So don’t wiggle out of it – know your score and stay alive.